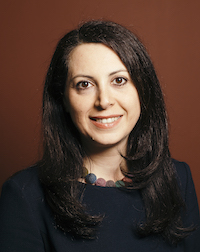 Sanaz Mostaghim is a full professor of Computer Science at the Otto von Guericke University of Magdeburg.

She received her PhD degree in electrical engineering and computer science under the supervision of Prof. Dr. Jürgen Teich at the University of Paderborn in 2004.  In her PhD thesis, she worked on bio-inspired optimization methods such as multi-objective evolutionary algorithms and particle swarm optimization methods which she applied to problems in computational chemistry and Antenna Design at PaSCo.

Sanaz joined the Computational Laboratory (CoLab) of the computational science department at the Swiss Federal Institute of Technology (ETH) Zurich in Switzerland in 2004. As a postdoctoral fellow, she worked together with Prof. Werner Halter from the Geology Department at ETHZ on quantification of multi-component silicate melts. She applied the simulation-based optimization methods and particle swarm optimization to this thermodynamic problem.

In 2006, Sanaz joined Institute AIFB at Karlsruhe Institute of Technology (KIT) and started working on her habilitation in applied computer science which she successfully finished in 2012. The title of her habilitation thesis is: Self-organized Parallel Optimization.

Since October 2013, she is working at the faculty of computer science at Otto von Guericke University of Magdeburg.

In 2014, Sanaz received the prectigious DFG Heisenberg-Professorship at KIT and an offer for professorship at the University of Lübeck, which she declined.

In 2018, Sanaz received an offer for Professorship from University of Southern Denmark (SDU).

Sanaz is an active member in international communities. She is a technical committee member at IEEE Computational Intelligence Society and since 2012 is serving as an associate editor for IEEE transactions on evolutionary computation and IEEE transactions on cybernetics. She is the chair of task force  Evolutionary Multi-objective Optimization of IEEE-CIS and the founding chair for task force Optimization Methods in Bioinformatics and Bioengineering (OMBB) of IEEE-CIS (chair: 2013-2015).